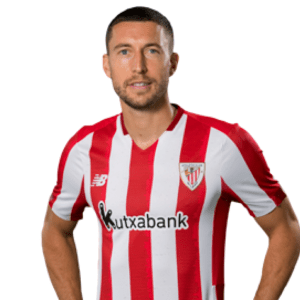 Óscar De Marcos was raised in the Basque city of Laguardia and his entire family were Athletic fans. He joined the academy of local club Alavés as a child and made it all the way to the first team. He played there for one season, during which they suffered relegations, and was purchased by Athletic in the summer of 2009 for a fee of €350,000. He was originally supposed to join Bilbao Athletic, but only played in one game as it was clear that he was ready to make an impact on the first team. He made his debut with the Lions on 6 August, 2009 in a Europa League win over BSC Young Boys and immediately went on to earn a consistent place in the squad. Throughout his Athletic career, De Marcos has functioned as a right-back, midfielder, and winger and has done well in every position. He has turned down offers from bigger clubs in order to stay at Athletic where his father is the President of a local supporters group.

Óscar De Marcos is under contract through 2021 and his deal does not contain a release clause.