In the late 19th century the city of Bilbao was a booming industrial area that attracted migrant workers for both coal-mining and the shipyards. These immigrants brought football with them and eventually created the Bilbao Football Club. In 1898, Basque students who had traveled to study in Britain returned and, with their new love of the game, founded Athletic Club. A meeting took place at Café Garcia in 1901 in order to come to an official agreement on rules and regulations and the two clubs eventually merged in 1902 when they took the name Biscay and won the first Copa del Rey tournament. Afterwards, the merger became official and the name Athletic Club was adopted in 1903. Today the club still recognizes 1898 as the the anniversary, but some fans hold to 1901 or 1903 as the beginning year.

Athletic have also held to a specific policy that makes them unique to any other club in the world. Since 1911, the Lions have only fielded players either born or formed in the Basque Country which makes their ability to stay in La Liga even more impressive, while it has also seen the club put a heavy emphasis on youth development. Despite some who have called this policy archaic or worse, Athletic believe in their desire to defend these values which are almost nonexistent in today’s game. It is a source of pride for the club, fans, and players who believe in representing something bigger and more precious. In truth, Athletic Club is a family.

The club adopted the nickname of Los Leones, The Lions, due to the fact that they played their games near the San Mamés church which was named after a saint who was thrown to lions by the Romans and was able to calm them down instead of being injured. These Lions had no trouble winning titles from the start. They would go on to win the Copa del Rey in 1903, 1904, 1911, 1914, 1915, and 1916. The San Mamés was opened in 1913 and Athletic star Pichichi scored the first ever goal at the new stadium. To this day the top scorer in La Liga is awarded with the Pichichi awarded named after the legendary striker. In 1928 Athletic helped to start La Liga and, to this day, remain one of only three founding clubs to have never been relegated, along with FC Barcelona and Real Madrid.

Athletic used a few different crests throughout their early years, with the first one being a blue circle with the letters A and C in the center. Blue and white were the colors first used until 1909 when a player and director named Juan Elorduy spent Christmas in London and was asked to bring back 25 new shirts. He wasn’t able to find enough and eventually chose to buy 50 shirts from Southampton who wore red and white, which were the colors of the flag of the Villa de Bilbao. The club immediately decided to change the colors and began wearing red and white stripes on 9 January 1910. The crest was changed to a red and white flag draped over a football and in 1922 it took another shape similar to what we know today. The current crest contains the bridge and church of San Anton, the wolves from the Haro family that founded Bilbao in 1300, the tree of Gernika, and the cross of San Andrés. Fred Pentland became the club’s first legendary coach. The British manager took over in 1921 and was an instant success. His team played a possession-style of football and he won his first title in 1923 when the Lions lifted the Copa del Rey for the 10th time. Pentland would leave the club after the 1925 season but returned in 1929 to guide the team to and unbeaten season, winning the double and then lifting the same trophies again in 1931. In total, Athletic won the Copa del Rey four straight years from 1930-1933 and were a dominant force in Spanish football. In 1931 they defeated Barcelona 12-1 which still stands as the biggest La Liga victory to this day. William Garbutt took over in 1936 and won the La Liga title in his first season. He was also responsible for promoting 17-year-old Ángel Zubieta who would become a club legend.

Football stopped in 1936 due to the Spanish Civil War which was an extremely difficult time in the Basque Country. La Liga resumed in 1939 and on 1 February of 1941 Dictator Francisco Franco passed a decree which mandated the use of Castillian in all club names, changing the team’s name to Atletico Bilbao. This would last until the decree was repealed on 26 July of 1972 which saw the return of Athletic Club. 1941 also saw the birth of a legend as Telmo Zarra made his debut and quickly became one of the greatest to ever wear the red and white shirt. In the 1950 season he scored 38 goals, a record which stood for 60 years, and would end his career having scored a club record 294 goals in all competitions.

Athletic got back to their winning ways in 1943 when they won the double and went on to lift the Copa del Rey the following two years as well. The 1950s were a golden era at the club with prominent players like Telmo Zarra, Rafa Iriondo, and Agustín Gaínza leading the team. They would help the club achieve another double in 1956, which also saw Athletic make their debut in Europe. Throughout the 1960s and 1970s the club suffered quite a bit, but memorable moments took place nonetheless. José Angel Iribar made his debut in 1962 and would go on to play until 1980 as one of the best goalkeepers in the history of La Liga. In December of 1976, after the death of Franco, Athletic played a match against rivals Real Sociedad and the two captains carried out the Ikurriña (Basque Flag) which was the first time it had been displayed in public since the Dictator’s passing. By 1977 the name Athletic Club was back. 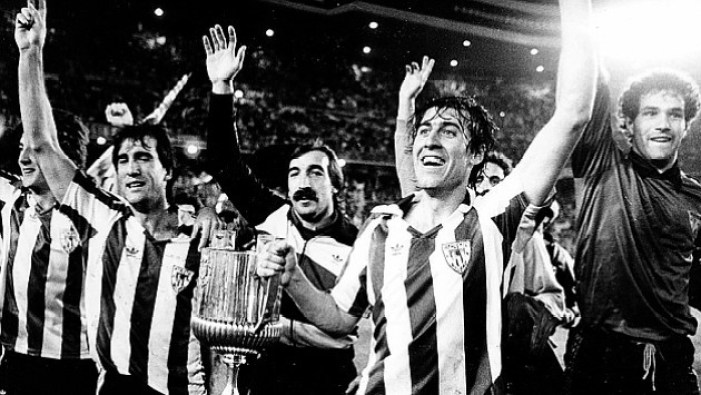 If Fred Pentland was the first legendary coach at Athletic, Javier Clemente was the second. He took over in 1981 and oversaw what many believe to be the best team Athletic has fielded in the history of the club. He led the Lions to a Copa del Rey winning campaign in 1983 and the double the following season. 1984 happens to be the last time that Athletic lifted a major trophy despite other great coaches such as former player Iribar, German Jump Heynckes, Argentine Marcelo Bielsa, and Clemente who returned in 1990 and then again in 2005.

Despite not being able to win a major trophy in over 30 years, Athletic have still boasted some of the greatest players of their time over that span such as Joseba Etxeberria and Julen Guerrero. The 21st century has been an interesting time for the club who saw their worst season in history in 2006/2007 but also defeated Barcelona 5-1 on aggregate to win the Spanish Super Cup in August of 2015. The club also opened their new stadium, also called San Mamés, in 2013 which is one of the most impressive in all of Europe.