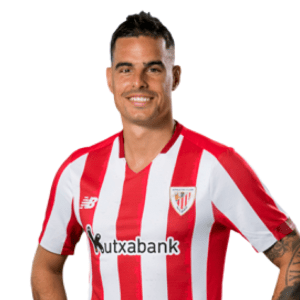 Dani García was born in the Basque city of Zumarraga and joined Real Sociedad’s youth academy at a young age. He then made the switch to Alicante where he played with the reserves before being promoted to the first team who suffered relegation from the Segunda B. García then joined Getafe B where he showed a lot of promise and was purchased one year later by Real Sociedad who immediately sent him on loan to Eibar who would eventually sign him on a permanent deal. During his six years with Eibar he helped lead the team in a historic rise from the Segunda B all the way to the Primera and was eventually named as a Captain. After turning down a contract renewal in the 2017/2018 season he became free to negotiate with other teams and soon signed a deal with Athletic Club who had pursued him for over a year. The club announced his signing on 3 June, 2018.

Dani García is under contract through 2022 and his deal contains a €70 million release clause.