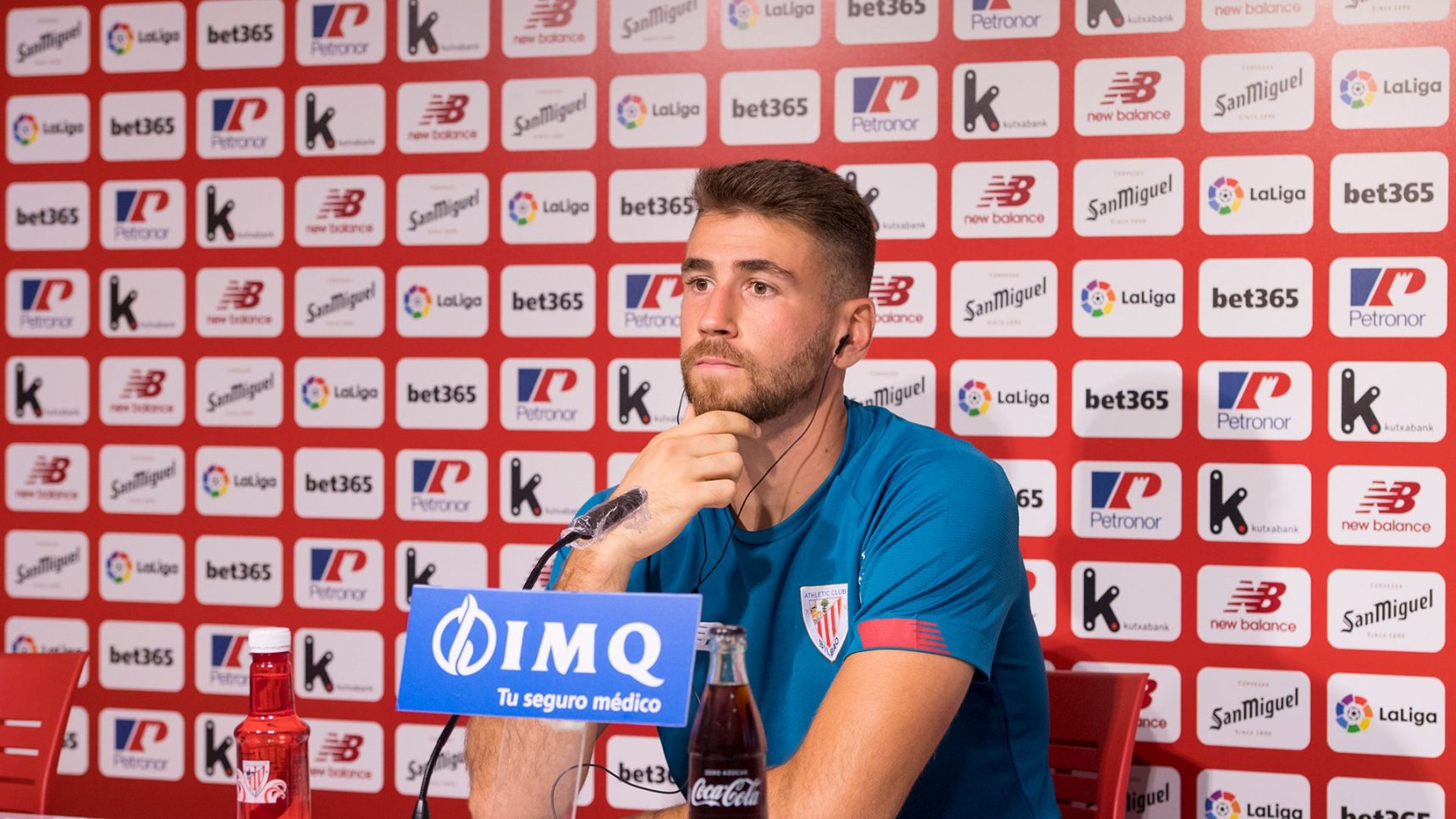 Yesterday was an unforgettable day for Unai Simón. Exactly two years after making his first team debut, the young goalkeeper received his first call up to the Spain National Team and signed a historic contract with Athletic. Simón penned a deal that will run through 2025 and doesn’t contain a release clause.

“I’m very happy,” Simón said during Friday’s press conference. “It’s a way of evaluating the work of last season. I finished with good feelings after a full season. Being called up to the Selection is very rewarding, it’s icing on the cake.”

Simón was always a talented player at Lezama, but was often in the shadows of Kepa Arrizabalaga and Alex Remiro. Ultimately, he was able to achieve his dream of playing for the first team and has become a star at San Mamés.

“The stars had to align to get to Athletic’s goal. I’ve always wanted to be in it, ever since I was little. Since I arrived here the club’s values and philosophy have been instilled in me. The moment they proposed a renewal I had the feeling of a dream come true and I’m very happy to be here for another five years.”

Following a remarkable season it came as no surprise that Simón attracted interest from other clubs across Europe. “My first order with my agent was that we give priority to Athletic and I will continue to do so,” Simón said when asked about rumored offers from the likes of Inter Milan. “I haven’t heard of offers from other clubs. They haven’t been sent to me because I wasn’t concerned about it.”

Choosing not to include a release clause in his new contract was a massive decision from Simón. Still just 23 years old, the Lezama product effectively guaranteed his future at the club and when asked why he did it, he responded that it was the best way to thank Athletic. “Not including a clause is a showing of mutual gratitude and trust.” (AC)

“Renewing without a clause is a way of thanking Athletic Club for everything they have done for me since I arrived here when I was 14 years old. Athletic have trained me as a professional and as a person. They found a house for me with a married couple who took care of me as if I were their son. They enrolled me in a school where I received a great education. Those things are valuable and I don’t know of any club that has done what Athletic have done for me. Not including a clause is a showing of mutual gratitude and trust.”

If for some reason Simón ever wanted to leave the Labor Court would determine his value in the absence of a release clause. Simón admitted that he hasn’t even considered it because his goal is to spend his entire career in Bilbao.

“I don’t think about that. My thought when renewing was to be here playing until the end of the contract and hopefully until the end of my career. Jokin and Iago have incredible qualities and can be starters for Athletic, it’s possible. I’m going to fight to the end and enjoy San Mamés.”

Simón finished third in the Zamora behind Thibaut Courtois and Jan Oblak which shows his quality over the past year. Winning the award would have been special, but for Simón success belongs to the entire team.

“It’s an individual award that is valued in a collective sport. If I finished in third place it’s because we have a great team. Everyone knows Athletic de Gaizka. We are solid in defense and part of that is playing as a team. I like that they compare me with those goalkeepers but the reality is different.” “I will fight to be a starter for as long as possible.” (EC)

When Simón made his first team debut two years ago it was a huge surprise. Kepa Arrizabalaga had recently left for Chelsea, Alex Remiro was in the midst of a contract dispute, and Iago Herrerín was injured. Since then Simón has established himself as one of Europe’s best goalkeepers and his emergence will likely see Iago Herrerín leave the club this summer.

“The decisions made by other goalkeepers should be respected, but it doesn’t depend on me. Iago has always given me his opinions, respect, and support. He has supported me at all times, and when he stopped playing he was by my side at all times. He trains like an animal and is as strong as a tree. I support whatever decision he makes.”

Like other great goalkeepers that have come before him, Simón understands what it means to wear the Number 1 shirt. In fact, he’s already been compared to club legend José Ángel Iribar. “I like those comments, who doesn’t, but comparing me to Iribar are big words,” he said. “I’ve played 48 games with Athletic not 600. Hopefully I will reach those figures. I will fight to be a starter as long as possible.”

Signing his new contract on the same day as his first international call was cause for celebration, but it wasn’t planned. When asked about his goals with Spain, Simón explained that he just wants to enjoy the experience.

“It was a coincidence, but a special date. The National Team is icing on the cake for your own club. I’m not going to set any goal of earning a permanent position for myself. I want to learn from all the best international players. I’m not thinking about the European Championship. I just want to enjoy it because the first call is a beautiful moment.” In Simón, Athletic have the goalkeeper of the present and future. Looking ahead to the upcoming season Simón is eager to get back on the field in front of fans and dreams of lifting the Copa del Rey title.

“It’s a different season. We are going to participate in four competitions and there is the Cup final that we’re so excited about. We want to take out La Gabarra. Then there is the Super Cup, La Liga, and another Cup. We are very excited about the season ahead. It would be a dream to be able to share this season with the fans at San Mamés. The fans deserve it and they are the reason for our success.”

With his new contract Simón became the 6th current Athletic player to reject having a release clause along with Iker Muniain, Óscar de Marcos, Mikel Balenziaga, Ibai Gómez, and Raúl García. As the first young start to do so, Unai Simón is an example to the next generation of players and proved his commitment and dedication to Athletic Club.